Beneficial insects like wild bees and butterflies are facing collapse. But insects that kill humans (usually, by putting nasty things in our blood when they bite us) are thriving. Last year alone, almost three million people were killed when mosquitos infected them with deadly diseases. That’s basically the entire populations of Philadelphia, San Francisco, and Denver combined, all dead in one year, all from mosquitos. (This number doesn’t count the hundreds of millions of people who suffer, but survive, nor the severe health problems from mosquito-borne diseases like Zika.)

A new breakthrough in genetic engineering has promise for wiping out not just mosquitos, but other insects that reproduce in mosquito-like ways.  There’s a weird mosquito DNA sequence that gets spliced (cut) in a certain way to produce either a male or a female mosquito. This sequence is absolutely necessary to turn the mosquito into a properly functioning male or a properly functioning female (scientists aren’t sure exactly how it makes that process happen), so it always gets carried on to the next generation. There’s a DNA sequence at the beginning of the splice area, and the female sequence has a special list that the male sequence doesn’t have. In the experiment, scientists took a new sequence of DNA and loaded it in that female sequence. The new DNA derailed the process for making a female mosquito.

But female mosquitos with two copies of the special DNA had some ill-formed male parts on their bodies (male antennae, and claspers put on upside-down). Also, they couldn’t suck blood because of a deformed proboscis, and they couldn’t lay eggs. 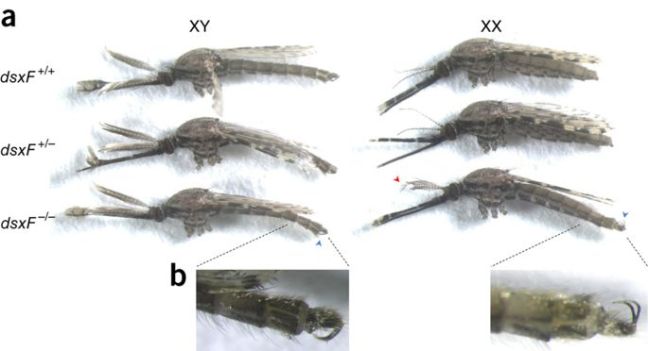 The special DNA sequence transferred as per usual rates (which is itself an achievement), and the entire population collapsed within 8-13 generations.

Now, I hate mosquitos. I slap them dead whenever one lands on me. I intentionally destroy their habitat in my backyard. I fully expect that they, and all blood-suckers like them, will not be part of a paradisaical earth (though I don’t have unassailable doctrinal support for that expectation, I’ve got some good stuff).

But there’s something about creating such a Frankenstein’s monster that I find horrifying– like the scene at the end of “The Fly” where the man-fly caught in the web begs to be killed.

Perhaps I shouldn’t anthropomorphize my deadly insects. Especially ones that, in every two years, kill enough innocent people to constitute another holocaust.
But that begs the question: where is the cut-off for when it’s okay to treat a living creature this way? I’m not talking about weighing the value of human life against other life– like I said, I smack mosquitos dead as much as I can. I wanted the doctor to kill all those millions of bacteria with splash of disinfectant before she operated on me. Humans are the best!

No, what I’m wondering about is the method. Certainly, it isn’t the mosquito’s fault that it needs to suck blood in order to get enough protein to lay its eggs. And, if a mosquito could care about such things, it would probably prefer to be disease-free rather than to infect (and diminish) its food supply. Under those circumstances, is it okay to create a creature that, to paraphrase C-3PO, seems to be made to suffer?

But then I think: if I saw a child dying from malaria, or born with microcephaly, and I learned it could have been prevented except for the fact that some person was worried that the abnormal mosquito had suffered, well, I’d be pretty steaming mad. Personally, the world-wide eradication of mosquitos and ticks is something I’d think is really, really, really good for humans and all wildlife, and I doubt I’d lose any sleep over using a method like this to make it a reality.

Does that conflict with my view that the ends doesn’t justify the means– that the means must be pure? Certainly, I wouldn’t create this weird mosquito just to see it suffer. Is it now okay to do that, because the result is to save a tremendous amount of suffering, and this is the only effective means to achieve that good result?

Going further, when I look around at the world, and see things like the tarantula hawk wasp, or even those gruesome polar bears, it gives me something to consider when I cast my thoughts up to the One who created them. The God who creates and saves is also the God who destroys and punishes. The Creator who made the lamb also made the “Tyger, Tyger, Burning Bright.”

I don’t know whether that excuses us.

But I do know that when we engage in acts of creation, we are using god-like powers. What we do with them is a good indication of how we’ve weighed moral choices, and how we’d behave if we had even more power in our hands.

A few of the more-noticed blog posts:

To Beard, or Not to Beard

World Travels of the Potato

Getting to know Zheng He

A Quick Intro to Football

What are you looking for?

What I’m working on now